The New Year Approaches: Penciling in Cancer on My Calendar 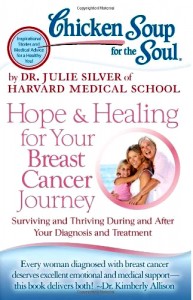 Editor’s Note: Beth Sanders Moore is the contributing author of this chapter taken from “Chicken Soup for the Soul: Hope & Healing for Your Breast Cancer Journey,” authored by Dr. Julie Silver of Harvard Medical School and published by Chicken Soup for the Soul Publishing, LLC (September 2012). Click here to purchase your copy of the book.

The last weekend of the first year of the new millennium was perfect. If I didn’t plan it to be perfect, I planned it nonetheless.

On New Year’s Day 2001, a bright fresh Monday, like millions of others I resolved to a better diet and regular exercise. I jotted down the names of a couple of new weight loss books and the latest articles from fitness gurus. Creating a better me was a project I calendared every year.

The thought that I might have breast cancer was the furthest thing from my mind. I had just had a clear mammogram. Yet the lump I felt while taking a shower a few weeks later was diagnosed as a malignant tumor. When I was told I had Stage II breast cancer, I began planning. After all, planning is what I do best and I believed by planning, I could lick cancer. Mine was an admiral attempt to get on top of the disease and not allow it to define me. But it was somewhat naïve. I soon learned a cancer diagnosis wrecks all plans and destroys any semblance of normalcy. It is the ever-present nemesis to the orderly. It is not something one can control.

Stubbornly though, I continued to plan. Other than fully educating myself and following my doctor’s orders, planning was my only other weapon to fight cancer. Once I accepted that cancer was going to forever live on my calendar, I began to see the realistic results of planning slowly reveal themselves. There was a place for my planning methodology; but, it had to exist within the confines of a new and different world and I needed to adjust. That was the first lesson I learned about life with cancer.

Thankfully, I was a quick study. With patience, I rearranged and reworked commitments to strictly follow doctor’s orders. Once I learned my treatment regime, with my nurses’ help I calendared everything I possibly could…each chemo treatment for the ensuing six months, the targeted date for my surgery and the final six weeks of post-surgery radiation. I wanted to see it all in black and white; it symbolized cancer wasn’t in complete control. I talked to everyone I knew who’d had cancer. I read everything I could written by others who’d run this course. I made my own list of what I would need to work through this. All of it would eventually come in handy and in the end, I stayed on track with my therapy.

I was asked to be part of clinical trials and I agreed to participate as often as possible. It educated me. It integrated me in the fight. It helped others. One trial tracked the efficacy of the drug Taxol based on how it’s administered. All treatments in the trial were given intravenously. In one group, patients were given Taxol in the hospital for a total of 12 doses. The second group was given chemo continuously for 24 hours once every three weeks for a period of 12 weeks, for a total of four doses. To enable patients in Group II to be mobile during the 24 hour drip, the drug was dispensed through a battery-operated infusion pump. I was chosen to receive chemo using the infusion pump. Wow! Four doses versus 12 sounded like a deal to me!

Not so much a deal once I was hooked up and toting the pump in a black pouch fastened around my waist. Chemo containing steroids flowed nonstop through a small plastic tube that went from the waist pouch to the central venous catheter front and center of my chest. I’ll never forget my first night at home with the pump. Following my cue to plan, my husband, Jess, stocked the kitchen with both my favorites and “chemo-compatible” food. I was so fidgety from the steroids I couldn’t sit still; I couldn’t eat a thing. I needed something in my stomach, so he ran to the grocery store on the hunt for creative options. While he was gone, I was overcome by full blown hysteria. About seven o’clock, I placed a 911 call to my doctor who talked me down from the ceiling and conceded there was too much steroid in the mix; he told me to down some Benadryl. It was on my standby-for-handy list. I took it and it helped.

In the early days of organizing my treatment regimen, I collected the phone numbers of friends and cancer survivors I knew. I had planned for the possibility of this crisis in what I still recall as the worst night of my life. Well past midnight, I talked by phone to friends including a long-time cancer survivor who was my college roommate. I also consulted my bestie from childhood, a doctor who was herself battling pancreatic cancer. I needed to know what they experienced. Was what I was going through par for the course?

It was enormously comforting to hear them recount their personal episodes and to assure me I would survive the night. Even with their assurances, my mind raced, raced, raced, raced, “How was I going to do this three more times? Would the next time be worse?” I didn’t want to be alone and I couldn’t sleep. Jess needed sleep to keep us both going. With every light in the bedroom blazing, he slept while I sat up in bed next to him needlepointing. I became calm.

The light of the next day further calmed me as did the passing of each hour toward the twenty-fourth when I knew that poison would stop being pumped into me. My remaining treatments were no cake walk, but my tolerance for them was significantly higher. I planned every way I could, practically and emotionally, to improve each treatment experience. The needlepointing helped me focus on a project other than fighting cancer. It gave me a creative outlet. It was a visual reminder that I moving forward toward a goal. I bought two more canvases. They and a bag of yarn went everywhere I went. The therapy worked, and in the end, I wound up with an unexpected lagniappe: two huge hand-pointed canvases from which I made Christmas stockings.

Another phase of the trial was to determine if there were differences in side effects between the two methods of delivering Taxol. Beginning the first day of treatment, for 21 days I was asked to record the severity of fever, fatigue, nausea, vomiting, mouth sores, muscle aches, and numbness and tingling in my hands and feet. The practice of recording side effects offered far more benefits to me than it could have the research team. It helped me cope with the abrupt changes and irreconcilable uncertainties of cancer. I realized that charting my side effects on paper and comparing how I felt from one day to the next helped me feel a little less anxious. I was calmed by visualizing on the calendar that fewer and fewer days of treatment lay ahead of me. I began seeing that the bad days were always followed by better days.

When I realized how many positives the charting was giving me, I started my own journaling and clung to it. It was a leap back to my personal sense of normalcy. I’ve continued to this day. I write not only the events of the day but also how I feel both physically and emotionally. Very little about cancer appears in my journal today; but, everything about my life does and committing my feelings in writing is very therapeutic.

Those New Year’s Day plans for my exercise routine had to be adjusted. On this, I yielded the least. Going to the gym early each morning had always been a joyful part of my daily routine and I was not going to give it up because of cancer. Besides, I had read that the endorphins produced during exercise helped relieve pain and fight fatigue and stress. Many days I could keep up the old pace. Other days, I couldn’t. I would go to the gym anyway. If all I could do was walk, I would walk. If I could only stretch, I would stretch. Anything to keep up my heart rate and my spirits. The alternative was lying in bed at home. I was forced to do that too; but, I kept my visits to the gym a priority and as a reminder that I hadn’t been stripped to nothing.

When the next New Year’ Day rolled around — several weeks after my treatment ended — I made no resolutions to diet and exercise. Instead, I adopted a new calendar. I eat a healthy diet, but I’m not obsessed with perfection. I have a regular and varied exercise routine, but I skip it if I don’t have the energy. I consistently journal, but if I fall asleep writing and don’t record the day’s events, I’m glad to have the rest. In each day, I incorporate quality time with God, my family and friends. Of course, I still plan, but I’ve learned how to live with uncertainty and accept change. I understand how fortunate I am that cancer hasn’t interrupted my life any more than it has. I found a way to pay that forward. I realize I could face the music again. I take nothing for granted. And, I know that in all life’s travails, there but for the grace of God, go I.

That, I can write in ink.