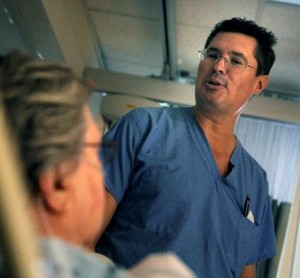 Editor’s Note: A board-certified gynecologic oncologist, Dr. Boulay blogs regularly at Journey Through Cancer. This blog first appeared February 26, 2013 on HuffPost and was re-published by its author on CancerForward.

Sur-vi-vor, noun [ser-vahy-ver]: a person who continues to function or prosper in spite of opposition, hardship, or setbacks.

As we enter a new phase in the understanding of cancer biology and its subsequent treatment, increasingly, more of us are living longer and fuller lives, with at least two-thirds of those diagnosed living at least five years. Yet extreme fear or awkwardness — or both — surrounding the topic of cancer survivorship has rendered even the most hearty either mute or shortly absent at first discussion. Truth is, we all have a story, often tragic, of the consequences of a cancer diagnosis. And whether that story is conceptually outdated, inaccurate, or mutated into some “whisper down the alley” facsimile, it is very real to us. So thank you very much, I’d just rather not discuss it. But I would bet that you also know many stories of quiet triumph over cancer, powerful stories of unparalleled growth of the human psyche, which transcended the reach of cancer and in doing so became… well, normal. Amazing and courageous stories lost to the banality of normalcy. So in honor of the more than 12 million Americans now living with a cancer diagnosis, it is time to begin a gentle discussion of the newer philosophies and definitions commonplace to the journey through cancer. It will affect us all in some way or another. Shouldn’t we all have a working knowledge of this topic?

Of tantamount importance in the cancer lexicon is some acceptable name of a group of individuals who have been diagnosed with cancer. Far too frequently this nomenclature, laden with some judgment as to the burden of their disease, has been applied to, rather than derived of, this amazing group of folks. Resultantly, each newly-floated collective noun of the cancer experience has been shot down, one after another in favor of a more inclusive, less judgmental descriptor of the entirety of the journey through cancer: from prediagnosis through diagnosis and treatment through remission and cure — or, if unsuccessful treatment, palliation and death. The term currently in favor to define such person is “cancer survivor.”

Older terms in use a generation or so ago, generally foretold the final stages of the journey: those who beat the odds — heros, those who succumbed to their disease — victims. Surprisingly, and sadly, I hear these terms still used today, often by caregivers or journalists struggling to imply some degree of the depth of the experience. Cancer survivors universally shun these terms, which simply do not describe the entirety of the journey. And they are far too laden with somebody else’s judgment of their predicament.

For instance, my grandmother — or Grandmaman, as we called her — was the “victim” of colon cancer in the early 1980s. Her late-stage diagnosis, due to no standardized colonoscopic screening, resulted in a colostomy and many years of suffering as a result of chemo and radiation. Yet during her five-year cancer survival, she taught me the power of human resiliency, the joy of a large, close family, and the love of new knowledge. All values I still cherish today. She was, and remains, my shining hero. And Lance Armstrong was the “hero” of advanced-stage testicular cancer in the late 1990s. Despite surgery, chemotherapy and radiation, Lance resumed his elite athlete status and continued winning numerous world cycling championships, including the prestigious Tour de France seven times. His development of, and support for, the Livestrong Foundation broke the chains of cancer bondage, finally introducing the word “hope” to cancer survivors. And in doing so ascended the altar of heroism, seen by no mortal since Hercules. Yet in the topsy-turvy world of cancer survivorship, hero becomes victim and vice versa. So let’s just let those to terms go, they’re too judgmental and rarely tell the whole story.

Those carrying a cancer diagnosis are often labeled as a cancer “patient” by the medical community. Although this term is nonjudgmental, it generally implies some active treatment is taking place: the fresh wound of surgery, the recurrent nausea of chemo. And when you think cancer “patient,” what comes to mind? Yeah, I know, me too. I don’t want to see those TV commercials anymore, either. The images that compel us to donate also reinforce the stereotype of the ghastly outcomes of cancer and its treatment. But for many patients, treatment is a small part of their journey, and for others treated as a chronic disease, the side effects are manageable with some lifestyle alteration. At the risk of being labeled a Pollyanna, I fully understand that there are still others who do remain patients under active treatment for the entirety of a difficult course. My point remains, though, that the term cancer “patient” is best used for those under active treatment, and doesn’t really apply to those who have long since outlived their disease.

Some cancer survivors choose their own personal monikers, oftentimes describing the intensity of their journey and the thrill of victory. The blogosphere and Twitterverse are replete with cancer kickers, conquerers, thrivers, warriors, victors, advocates and rock stars celebrating the sweet joys that life after cancer offers. While still others, undaunted by body image changes resultant from cancer treatment, taunt their disease with “ballsy” and “single jingle” for testicular cancer survivors — or even, for one tough-minded breast cancer survivor, “bald sweaty bitch with one tit.” In your face, cancer. But not really for everyone.

Most carrying a cancer diagnosis self-identify as cancer “survivors.” It is a far more universal term taking into consideration the breadth of the cancer experience while offering no judgment as to the burden or outcome of the disease. From one moment after hearing “I’m sorry, you have cancer,” a survivor is born. And the term remains applicable throughout a lifetime, no matter which phase of the disease that the survivor is experiencing.

My wife, a five-year leukemia survivor, controls her disease with daily oral chemotherapy, which she will take forever. She and her drug have acclimated to each other, resulting in a meaningful albeit slightly less frenzied lifestyle with all the blessings and curses that motherhood has to offer. My dad, an eight-year prostate cancer survivor, has undergone surgery, and then radiation several years later when his disease recurred. He really doesn’t ever recall being sick, and his cancer has minimally affected his lifestyle. My grandmother, a five-year colon cancer survivor, succumbed to her disease. And after several years of deep suffering, she passed away quietly with a tear in her eye. Each adopted different strategies to get through their journeys: lifestyle change, benign denial or deep depression. Each changed by their cancer. Each of them survivors.