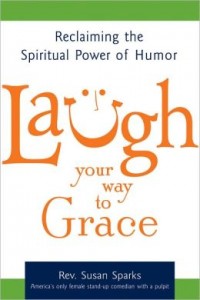 Editor’s Note: Portions of this blog are excerpted from “Laugh Your Way to Grace: Reclaiming the Spiritual Power of Humor,” 2010 by Rev. Susan Sparks. Permission granted by SkyLight Paths Publishing Woodstock, VT.

“Is this going to take long?” I asked the nurse. I needed to know, because I had wedged this terribly inconvenient medical test between two important meetings and the time for the second was quickly approaching.

I don’t think so,” she answered. The door then opened and the doctor appeared with a pathologist in tow. Not a good sign.

“Ms. Sparks, I’m afraid the cells are cancerous,” the doctor said in a flat monotone while looking at the report. “We will need to schedule surgery, then talk about radiation and chemo.” They both gave me a look of “bummer” and quickly left the room.

I sat stunned with disbelief. A minute ago I was worried about a consulting gig for VH1. Now, I had cancer?

After a few moments of silence, the well-meaning nurse turned to me and said, “Don’t you worry honey, the Lord will take care.”

I’m sure I’ve said something similar to others in crisis, but right then it hit me wrong.

“Take care?” I snapped. “I think the Lord should have started a little earlier in taking care — like a couple of years ago when these cells started growing!”

She put her arm on my shoulder with this knowing look and said more forcefully, “honey, He will take care.” I rolled my eyes.

“He has never had breast cancer, so I seriously doubt that He has any idea of how to take care of this!”

The nurse shook her head in distain and walked out, leaving me alone with what were soon to become my two constant companions: cancer and an overly sarcastic sense of humor.

In the beginning it was simply too much to comprehend that I was now one of “those people” who had cancer. I had read that one of the best ways to come to grips with denial is to share the news with other people. Bad plan.

“You have cancer? Wow. Does it hurt?”

“My best friend had breast cancer. I miss her so.”

People could be so insensitive. As a standup comedian (and a minister), the only alternative was to soften the blow through humor.

The first thing I needed was something to remind me to laugh. After a preliminary Google search on “cancer and humor,” I found myself immersed in a number of sites dedicated to funny cancer products.

Within days, I was drinking my morning coffee out of a mug that said: “My oncologist can beat up your oncologist.” Then a new magnet appeared on my refrigerator: “Cancer—it’s not just an astrological sign anymore.” At some point I bought a notepad that had a checklist at the top: “Buy milk, get gas, kick cancer’s butt.” But my all-time favorite was a t-shirt with big red letters that said: “Save the Titties.” Every time I saw that mug, magnet or shirt, I started laughing. And you know what? I felt better.

At first, I thought I felt better because I was simply using humor to block the shock and pain. But then I started doing some reading about humor and healing and discovered that laughter actually fosters physical healing through lowering blood pressure, increasing heart and lung function, and bolstering the immune system.

Dr. Lee Berk, a professor at LLU’s Schools of Medicine and Public Health explained, “If you took what we now know about the capability of laughter to manipulate the immune system, and bottled it, it would need FDA approval.”

Humor’s effects on healing has grown so much that the field has a name – psychoneuroimmunology — the study of how psychological factors, the brain and the immune system interact to influence health. Hospitals and treatment centers, such as the Cancer Treatment Centers of America, now employ humor therapy as part of their treatment options. Other organizations, such as Comedy Cures and Big Apple Circus Clown Care are dedicated to bringing laughter and joy to children and adults living with illness and disabilities.

Laughter not only promotes physical wellness, but emotional healing as well. In a study at Stanford University, researchers showed that laughing stimulates the parts of our brain that use dopamine – a kind of “feel good” chemical messenger.

Fabulous! That meant that laughter falls into the category of two of my favorite things: chocolate and chili peppers. All three produce a major boost of endorphins — nature’s own “happy pill:” chili peppers through capsasin, chocolate through serotonin and laughter through the increased oxygen flow.

The first week after my diagnosis, I was sent to get a cat scan. In addition to being scared out of my wits, I was also in a surly mood thanks to all the mountain of tests and appointments. After I arrived, the technician informed me that one of the tests he was going to perform was a liver scan. Allowing my anger to get the best of me, I said with a sigh, “Well, I had two beers last night. Just take that into consideration.” He looked at me with an exhausted look, then left the room to administer the test.

After a few minutes, he returned with a grave look on his face. “We’re not supposed to give test results on the spot.” He paused, looked at the floor and shook his head. “But you clearly have the early stages of what appears to be ‘Bud Light’ syndrome.”

My first reaction was, “oh my God what is that?” Then I realized what he had said and burst out laughing. I left the hospital feeling a wee bit lighter and happier.

Of all the healing effects, however, the most profound result of laughter was perspective. Charlie Chaplin said, “Life in the close-up is a tragedy, but life in the longshot is a comedy.” When we laugh, the balance of power shifts and we reclaim control – we take life back. Being able to laugh in a place of pain reminded me that cancer was not who I was, it was simply what I was experiencing. Cancer was not going to define me and laughter was my proof.

Six years later, I am cancer free. And while there were many factors that contributed to my recovery, I believe laughter had the most powerful effect. Bring a smile into your life; allow laughter to echo in the treatment room. Use laughter to empower the mind, body and spirit for the journey. Who knows? You may just laugh yourself well.